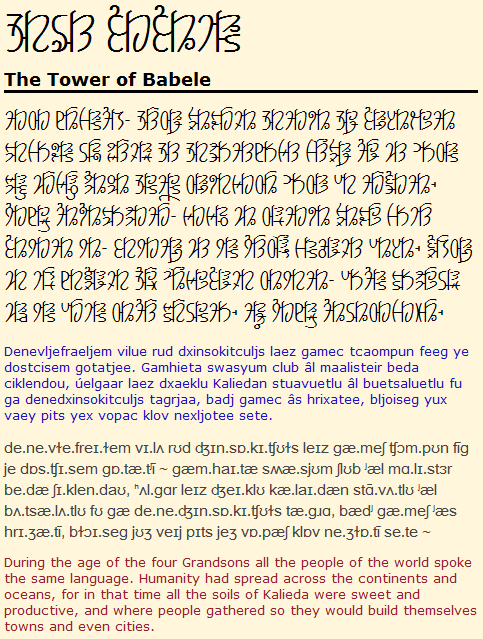 Do you both like the pretty scriptie? It's new - a brand new conscript I've developed for my Gevey conlang - more info (natch) on this page of the Kalieda Encyclopaedia.

In fact the whole language is undergoing some big changes at the moment - yes, even after three decades, I can still find an excuse to rip up my major conlang to redo things. Like giving the language a whole new latin script orthography. And messing around with prepositions to make them work better. A wholesale revision of the lexicon, changes and updates on lots of pages - though none of that is live at the moment; the key words being 'is undergoing'. Forty day's worth of work so far, and at least another 2-3 weeks to go.

What's this got to do with Babel, I hear you both asking? Well, naturally I have to update the Gevey translation of the Babel story, which of course gives me an opportunity to rewrite it. I've never really been comfortable with the existing translation - even adapting it to meet the needs of my conworld, it still reeks of Genesis. So over the next week I'll be translating a new adaption of the old tale.

The Tower of Babele

During the age of the four Grandsons all the people of the world spoke the same language. Humanity had spread across the continents and oceans, for in that time all the soils of Kalieda were sweet and productive. And where people gathered they built themselves towns and even cities.

It is said that the youngest of the Grandsons, the Lord of Storms, lived in the east of our continent, in the area we now call Cantane. People whispered that he was the least of the four Grandsons, being the last born. When the rumours reached his ears, he grew angry and wrathful. Many people died.

Then a man, seeing the slaughter, went to his Lord and said: 'If I tell you of a way to prove to all people that you are the greatest of Lords, will you stop the killing?'

'Tell me,' said the Lord of Storms, 'and I shall consider it.'

'Let us build a tower, my Lord, a tower so strong and so high that it shall touch the stars. Then no one will doubt that you are the greatest man in the world. But you must stop killing your people, otherwise there will be nobody left to witness your worth and your wisdom.'

'Build me this tower,' he commanded. And so the slaughter was stopped and everybody was set to work scouring the forests around them for wood, gouging the earth for clay and blocking wide rivers for water.

Seasons passed, and slowly the tower grew. Young boys became grandfathers and still the tower grew, passing through the clouds that gathered around to watch this strange activity. Such was the wonder that people from across the world flocked to its base, and the city of the Lord of Storms became the biggest and richest city in the world.

One day an old beggar wandered into the city, and stood to look up at the tower. 'What is the meaning of this thing?' he asked.

'We call it the Tower of Babele, the Lord of Storms,' a man told him. 'It is the greatest thing in the world.'

'Who needs temples when we have the tower?'

'But what need do you have of such towers when the Creator has given you mountains to marvel at?'

'We can build our own mountains,' laughed the man. 'We are now more than the Creator could ever have imagined, if he had ever existed!'

And the Creator smiled at the man, and breathed in deeply, and grew, and grew, and grew. Tornadoes formed around him as his height increased, buildings collapsed at the stretch of his feet. Storm clouds built a crown of lightning for his brow. Within minutes he was as tall as the tower, and still he grew.

The Creator said: 'Listen to my judgment! I have seen a man's greatest work, and I see nothing worthy of mankind. There is more beauty and power, grace and honour in the building and birthing of a new baby! This tower shall die today,' and with a touch of His finger the great erection collapsed.

'Go now,' ordered the Creator, 'and learn once again the purpose I gave to your ancestors. See with fresh eyes the world around you. Worship with new words the wonders of the sea, and the air, and the soil upon which you live!'

This is the story of how the over-pride of humanity led to the loss of our common ears and our common tongues. For from that moment, the peoples of the world were scattered, and none could understand the words of their neighbours, their friends, their children. Only one word did the Creator permit all people to keep: babele, that is confusion, to remind us all of how we allowed ourselves to be mesmerised by our own works, forgetting the world about us.
Posted by Rik at 9:33 pm No comments:

Not heard of him? He's one of them literary agents from the US of A (and soon to be a published author himself). He blogs regularly on the state of the publishing world, gives out a lot of handsome advice for free, and is an all-round 'good egg' type of guy.

The fact is, I'm a bear of very little patience. I'm bored already of all this submissions palaver. And yet at the same time I'm excited - very excited - about the future of book publishing: opportunities (if not riches) are sprouting around us like weeds in spring.

I can see where these thoughts are going already and I am not scared, not scared at all ...
Posted by Rik at 9:31 pm No comments: