The last word typed, I thank
my characters. "No problem,"

says one as it plucks away
a face and wipes clean

its head. "We are always happy
to help birth a new story."

these dolls who halter my text
and make eyes skip through scenes.

"I believe you know the way
out," the faceless one adds.
Posted by Rik at 10:31 pm No comments:

She dabs his hot form
with damp cloths, smooths
tremors from his limbs.
I see two faces: bliss
amid the scale hide
and eyes that sing.
Zinc balms swathe blisters:
she wraps him in swaddle;
snow over a new-sown grave.
My lungs rack at
each breath. She reeks
of rose and soaps.
Wires weave monitors to skin
and graphs dance on screens;
Her claw rests on his brow.
Cool, she is; calm.
I am at her mercy
and all is good.
She slips away and a machine
wails an escape: his crisp
flesh shackle falls still.
Posted by Rik at 10:02 pm No comments:

Would you wear a killer's cardigan?
It's only wool, see, a weave of sheep
caught on needles for the looping.

And that ring, a sweetheart's gift,
has no magic; the stones glint
metaphors - a garnet's love.

Those locks of your hair I curl
in my wallet? A keepsake, no more:
a clipped crime for a stolen moment.
Posted by Rik at 9:29 pm No comments:

A question for you both: too much modifier?

Peter watches his lion lie
in the bucket where he set it:
first to flare is the tuft
of the beastling's tail-tip, curled
in the pail's cylindrical seam -
its tempo twitch a cub's annoyance
at the chafe of infant constraints.

Peter, too, is impatient.
He coils a smoke-rope tendril
in his lung as his toy's loin
grows tuffs of lemon-lick curls.
As a chesty ember glows and dims
and glows amid the shoddy he smiles
and shifts on his knee, and watches.

The lad claps as a collar of mane
erupts from the neck - a pride
of flames set to stalk and chase
across the dry-weave carpet savannah.
His lion looks up at the sound,
lifts a paw to let the lap
of heat sharpen claws; it pounces

at Peter, struggles to lever
its haunch across the melted rim
of its lair, leaps up to reach
the table hide where the boy
huddles with his matches; when
he proffers a hand to ruffle
the singed fur the toy roars -

a deep rumble that sets a gale
among the bedroom curtains
and drives the angel mobile
to dance on the pins of soot
snowflakes blooming the air;
across Peter's peach-fuzz wrists
a tight new glove knits to skin.
Posted by Rik at 8:39 pm No comments:

Annie sees dragons in all things
hidden like moths amid fur:
here in the bricks of her office
is a wyrm set to watch her flinch
through doors opened by ghosts.

She ignores the nip of its breath
and clips through the marbled foyer,
lets the lift-drake enfold her
in glittery wings and huff
her aloft to her work nook.

The wyvern at the tea point
winks as it casts a cere
of flame over water; she strokes
the nub of its snout as it drips
steam through her bitter grinds.

Colleagues walk the corridors
ahead of her, their heels a hiss
of static on the knots of a great
blue tongue, each step a whisper -
"I taste you; I hunger; I want."

Annie would tell her workmates
she sees dragons in all things,
that the office will eat them -
except the scales on their eyes
are part of the hide, best left.
Posted by Rik at 8:05 pm No comments:

Wax - Building A Bridge To Your Heart

I forgot just how good this video is.

Should I be embarrassed to admit that I can still remember all the words to the song?

No. I have no shame.

My lack of posts can be explained - honest, guv!

1. I'm out of work looking for a job. Jobhunting takes up a lot of my fret time.

2. I might be in the process of wasting a bit of time developing a new conlang. It's like a sickness or compulsion: I can't help myself.

But the main reason for not posting is my Open University work, wherein I'm learning to program in Java. Typically, not much was soaking in from the course books, so I did what i normally do in such situations: I started mucking around with code.

See, a long while back I had an idea for a mad conworld-related board game - a sort of bastard backgammon crossed with an African bead game of my own design. I've no idea if the rules of the game are viable, so I decided to make a playable version - just for the hell of it really. To turn my efforts legitimate I'm hand-coded the whole shebang and, because it's summer and the heat deranged me, I decided to try and make it an interactive online thingy (to cover the networking and threading stuff I was having difficulty with on the course).

It's nowhere near finished yet, but most of the basics are in - including all the fun game rules stuff and a tweet-like thingy for the social side of stuff. I'm sure the project will keep me off the streets for a few weeks more ...

Some screenshots of my baby: 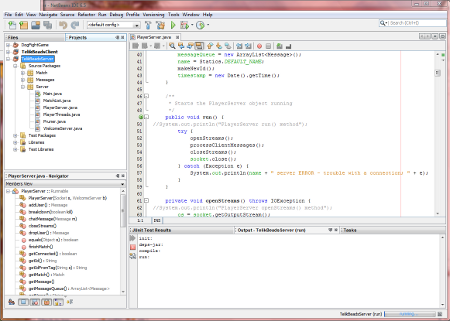 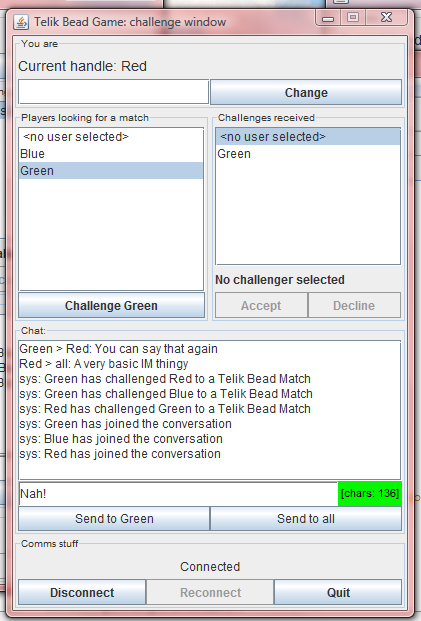 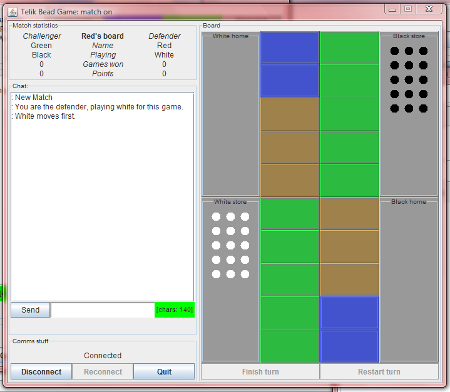 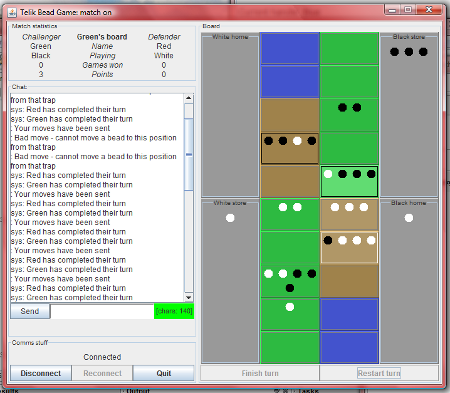 The Gods in the Jungle @ Apple iBooks

Just in case either of you couldn't find the book on the iBooks thingy, the links below will take you to the page:

It migh be cheap but it certainly ain't nasty, innit!
Posted by Rik at 5:30 pm No comments: