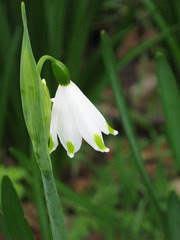 070223 kew 03
Originally uploaded by adleyrik.
I went to Kew Gardens today, partly to see their tropical extravaganza exhibition, but mainly to take photos of flowers. Particularly snowdrops. Don't ask me why snowdrops: it was just something that had to be done. Anyways, many - many! - photos were taken, and this is probably the best snowdrop photo of the day. There's 7 more photos (not all of snowdrops) on my Flickr Stream for those with time to spare to pop over and coo at my slowly improving photo skillz.
Posted by Rik at 2:38 am 1 comment:

Is it working now?

This poem is starting to give me grief. Please tell me it's working now.

Between the light and dark, a blink: you take
my hand and net aside the camouflage
to walk inside the room. There's ghosts in here -
they wail in whispers, grunts; the shunts and smacks
of fruitless, faceless love; anonymous
entanglements of slugging tongues. I slip
my hands around your cottoned waist, then down
inside your jeans to cup your muscled arse
and pull our groins together. Can't you see
the devil set within my eyes? I can suck
the wisdom teeth from jaws, the snot from lungs;
I can gnaw through sweat-built chests to lick the hearts
of warriors, my fifteen minute friend
who asked to dance astride this tumid tail.

A complete rewrite of a previously shite-ridden draft of a poem, for your delectation:

Between the light and dark, a veil: you take
my hand and palm aside the barrier
to walk inside the room. There's ghosts in here -
they wail in whispers, grunts; the shunts and smacks
of fruitless, faceless love; anonymous
entanglements of slugging tongues. I slip
my fingers round your cotton waist, then down
within your jeans to cup your muscled arse
and pull our groins together. Can't you see
the devil sat within my eyes? I can suck
the wisdom teeth from jaws, the snot from lungs;
I can gnaw through sweat-built chests to lick the hearts
of warriors, my fifteen minute friend:
this lustful demon's trade beyond the veil.

A redraft of an earlier love poem thingy. This one is now cooked to my requirements, and ready to serve. Enjoy!

When he laughs his tongue
splits his lips, spider lines
compressed like the accordion
serenading the the diners;
the veins across his bow-nose
beacon his joy of fine malts.

Her joy is sedate, her oatmeal
hands clasped to the linen
where she hides her smile,
her beige eyes tuned to his face;
I watch her water-stretched heel
stroke along the curve of his calf.

I carve designs on the tablecloth
with the steel of my knife, quiet
amid the clatter. As I wait
for your late arrival I refuel
on cheap house white and the sight
of the waiter's tight groin.

Can you see the rikweb?

It's probably just my computer, but I seem to be having problems viewing certain pages on my website using the new IE7. Whenever I try to view a dynamic page with IE7 - such as the poems archive the browser throws an "unable to connect to the database" error (and then starts dribbling at the mouth). This isn't happening with Konqueror or Firefox, which are either too dense to worry about such errors or too laid back to care. Or alternatively it could be some supernatural glitch where whenever I use IE7 (and ONLY when I'm using IE7) my website's server goes on strike. I don't think it's a cache thingy because the pages are dynamic and so have to be reloaded every time they're called.

After agonising for ages about how to begin the story, I've finally written the first (short) episode and posted it to the new blog.

This is going to be a very "episodic" affair. My plan is to try and post a new episode every Friday, or if I'm feeling particularly creative more often. But there should definitely be a new post every Friday because that's what it says I'll do in my writing diary.

So in structure it's probably going to end up a bit like Tales of the City, following the stories of different people as and when I develop them. But I also want it to be science fiction, so I get the chance to experiment with different ways of infodumping. And I want to see if I can weave the alien setting into the story wherever possible - one of my favourite reads of the past couple of years was The No 1 Ladies Detective Agency which managed to show me Botswana through the stories of the main characters rather than in spite of them. I've spent over 30 years developing my constructed world: unless I can find an effective way to immerse the reader into the world then that's probably 30 years of work down the metaphorical drain.

I've also decided to label the episodes according to the characters appearing in that episode. The idea of "multi-linear" storytelling attracts the less stable side of my mind, but this is the only concession I'm going to give that demon in me, at least until I've learned how to do plots in the traditional way.
Posted by Rik at 11:27 am 2 comments: