I'm still not quite sure how I managed it, but I think - I think - I've managed to work out how people can let their friends know about their sprite, luck and/or aphorism.

(And specially for Julie, after she moaned about a different app on Facebook that wouldn't stop spamming people, I've programmed my app so that it only posts to a user's friends if the user deliberately clicks on a button and then agrees to send the message by clicking on another button - oh, and after they sent the message the button disappears so they can't send it multiple times during a session. Because I, too, care about that sort of thing - even if I am trying to sell my book and thus want as many people as possible to have fun with my little app).

All that's left to do is the sprite text, and adding a few more aphorisms.

The website is coming along nicely. Just the sprite text to do now, and adding a few more aphorisms wouldn't hurt.

But this is supposed to be a Facebook app. And Facebook is hell. Hell! Well, coding an app to play nicely with Facebook is hell. Astonishingly, I've managed to do most of what I hoped - though I haven't managed to figure out how to get it so people can see their ward (or luck, or sprite, or aphorism) and click a button to share it with their friends. That's the golden egg of the whole palaver, as my app would then show up in the user's friend's newsfeeds with links to the app and everything ... but I can't figure out how to make it work.

It's driving me nuts!

I'm beginning to loathe the folks who coded the facebook, for they are evil.
Posted by Rik at 11:37 pm No comments:

1. Every voter gets exactly 1 vote, marked as an X next to a single candidate's name

2. Divide the country into 300 constituencies, the largest having no more than double the no of voters of the smallest. Also, roughly 30 constituencies per region

4. To be elected, a candidate must come first or second in the constituency vote

... so far, so boring. Now for the interesting stuff.

5. For every 4000 votes a successful candidate receives, they are awarded 1 parliamentary vote

6. Every party contesting more than 10 constituencies in a region can nominate a regional candidate. Each region shall elect 5 regional MPs

9. The 5 regional candidates receiving the most transferred votes are elected.

a. 1 person, 1 (non-transferrable) vote. Simple, neat, clean. Also, the results will be known within hours of the polls closing, and there will still be a link between MPs and their constituencies

b. Few votes are wasted: those votes not used in the constituency are mopped up by the regional candidate

c. The number of MPs elected may not be very proportional, but the number of parliamentary votes allocated will be reasonably accurate: the parties with the highest % vote in a region will receive slightly more votes, and very small parties will not.

d. Independents - not likely to do well in the constituencies, but if they band together to put up a regional candidate they might just have a chance of getting a seat (and vote) in parliament

e. EVERY VOTE COUNTS - an end to this 'marginal seat' nonsense that deprives the rest of us of having a say in elections.
Posted by Rik at 10:32 pm No comments:

A second stab at the pretty graphics ...

I'm beginning to make progress with the ward webpages (though not yet with the Facebook app page).

Comments and suggestions from either of you on the usability and content of the site would be very welcome! 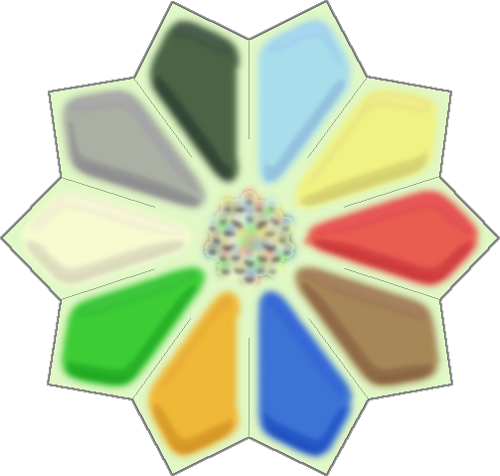 Bonus RikThought: It's kinda sad that I can now type out the list of elements without needing to check my notes.
Posted by Rik at 8:51 pm No comments: