Getting my poems to pay for lunch?

Now, I like this idea. I like it a lot. I think it could be a way to get people to give me money for my poems - if they want to, of course. Currently the poems are accessible for free on my website - without any advertising to distract from the RikVerse experience, to boot. It is, in effect, my gift to the world (though some might be tempted to say 'a curse on the world', but I know people who know where you live, so don't!). But it would be nice if I could find a way to entice people to gift me back some cash in exchange for the joy (don't even think it!) my poems give them.

I tried adding a PayPal button once. I think maybe three people pressed it and coughed up some dosh over the course of two years. So the button went: it was embarrassing the rest of the site. And, like I said, I refuse to have advertising messing up my displays.

I could always restrict the number of poems on the site, and publish the rest in books for purchase. Lots of other poets seem to follow this model - a tidbit here, an enticement there. But I don't see the point of it. I want the poems to be read - widely read - so incarcerating them behind the walls of a commercial transaction is not going to help them meet that prime purpose, is it?

So Kachingle.com appeals to me in many, many ways. I ought to sign up to it immediately. What's holding you back then, Rik? I can hear you both asking.

Um, well I don't know if it will work in real life. The kachingle folks say they track people's movements across the web, where they go to browse, and I worry that if the tracking is perceived to be too intrusive then people just won't sign up. And if I branded my website as a Kachingle site people might see it as part of the Big Brother apparatus - I mean, what regular guy wants people to find out they read poetry, ferchristssake?

So I don't know. Maybe I will sign up.

Mandarins
(This being a True Account of an Occurrence taking place on the Second Floor of No. 1, Horse Guards Road, in the Offices above the Chancellor's Suite, working Necessarily Late one Evening in the Month of March, 2006)

It takes a squint to catch him: don't look -
he's there! See him stare across the room,
a man stripped from his time, bemused by desks
and phones, dividing screens, fluorine lights
that make his inky fingers glow. He frowns
beneath his wig, a blot of mud still wet
around his calf. Why is he here? His arm
curls round parchments, briefs and notes
with cotton ribbons wound about. When I turn
my head a touch he starts, returns the glance.
I smile: 'see us', my eyebrows arch, 'both lost
inside this Treasury, too poor to seek escape'.
Posted by Rik at 10:59 pm No comments:

This one was working right up to the last line. Course, soon as I started tampering with it, other things changed too.

But I think I've nailed it this time ...

He brings a harsh heat into the room;
stones among sand: "You see me?"

I nod, reach for the warm whisky
as he hunches down on the chair
with the snapped back, almond mouth
bitter within its shallow beard.

He says: "I need a vengeance. My grave
has room for another, a brother
to lie in his furrow by my bones.
I can pay you in camels, or goats."

The sun in my dull mirror, it hangs
off the broken window, bloods clouds,
marks a fall. From the street, a shout;
a coil of flamed headline; the bark
of a car. "Am I your brother's seeker?"

As you both may have noticed, one of my ongoing projects is to write some poems about the forthcoming Olympic Games, to be held in London in 2012. Why? Well, I live less than a mile away from where the stadium is being built - which in my view gives me a perfect right to consider myself a very unofficial poet-not-quite-in-residence-but-just-on-the-borders-if-you-know-what-I-mean for the whole shebang.

I'm sure there will be officially appointed poets along in due course, but until someone sues me here's some links to some of the poems that are competing for the glory of appearing in my forthcoming chapbook (due sometime in 2012, provisionally titled Olympus, because the organising committee seem to be a bit on the sharp side when it comes to trademarks and stuff):

Progress with this project over the next four years can be followed on Rik's homely little poetry workshack on the Rikverse website.
Posted by Rik at 2:43 pm No comments:

Actually this is a redraft, previously called 'Waiting for the Train at Stratford Station' - the need for a new title was the least of that version's worries ...

Beyond Stratford station's rust fence,
a field in plough: farrow and till -
ripe for seeding.

The warehouses have been folded away
so architectures can set root, bed down -
glass petal, steel stem.

We all watch: our diamond-cold eyes catch
each change daily: today, a groundfrost -
sods snap in the ice.

This one's being stubborn. It just won't come into focus for me, though I can see the shape of it - it feels sound in principle, but just needs a bit more crafting to get it there. Anyways:

With the marksman's lead threaded
in his spine, they took him down
to settle in the rocking dark, alert
to the cracks of battle: splinter spars;
powder pillows heft from copper store
to cannon; sharp wine in water; shouts;
sweats. He bled in his ship of skin,
three hours to reach death's dock.

Another man has no plaque, nor grave
beyond a weight of water. He has instead
a glass display, labels to mark him:
barber-surgeon drowned with his chest.
Here are his knives, his herbs, a leather
of shoe, some dice, some coins, a bone
nit-comb. He has no face; his blood
rusts in Solent muds. Still he was here.

This boat is all lignin bone in mist,
a preservation of what was once great,
and lost, and rescued. I pay good coin
to view her - for she is my history
as much as the bricks and stones
of the town surrounding us, the heroes
who watched these docks slip past,
a clinch in our tide's slow pulse.
Posted by Rik at 10:15 pm No comments:

With the marksman's lead threaded in his spine,
they took him down to settle in the rocking dark
alert to the cracks of battle: splintering wood;
powdery bags heft from copper store to cannon;
sharp wine in water; shouts; sweat. He bled
in his ship of skin, three hours to reach death.

We know him by his ship. I can guess this other
caught in a glass display. He was a barber-surgeon
sunk and drowned with his chest of knives and herbs,
his leather shoe, his dice and coins, his bone nit-comb
- tombed in Solent muds to wait on God's restoration.
His name is with his bones; I do not know his face.

I want to stitch wounds, make whole the world, but
this hand that would hold a needle was once the air
they breathed, the food they ate; soon to be mite-meal.
We are the blood and bone of England: it will suffice.
Posted by Rik at 10:57 pm No comments: 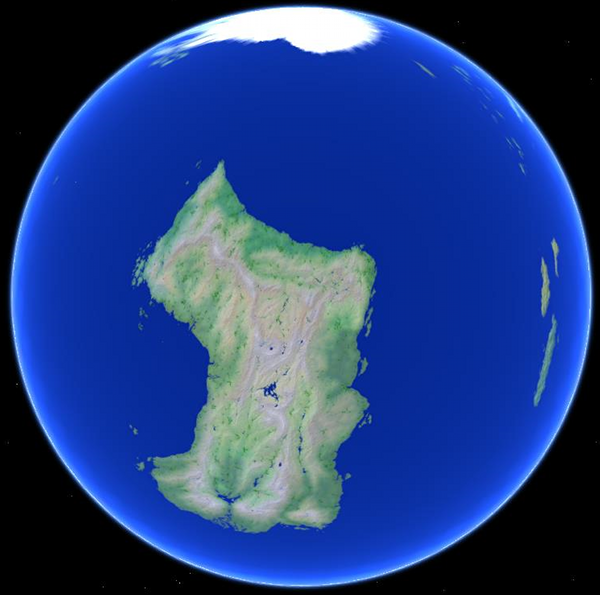 The continent of Falah: 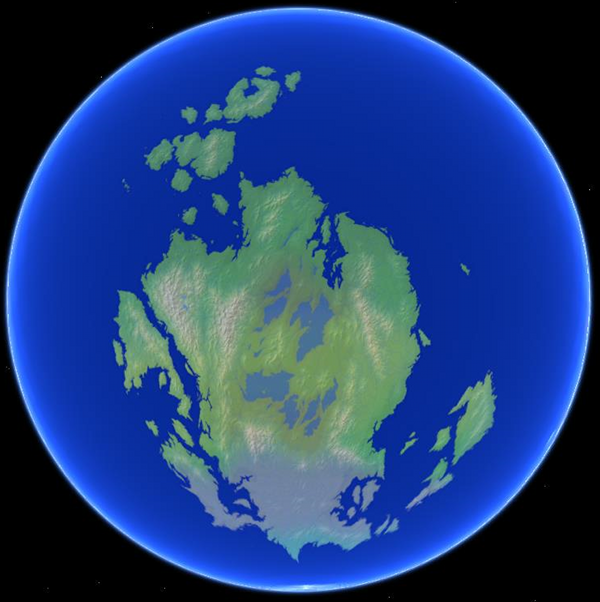 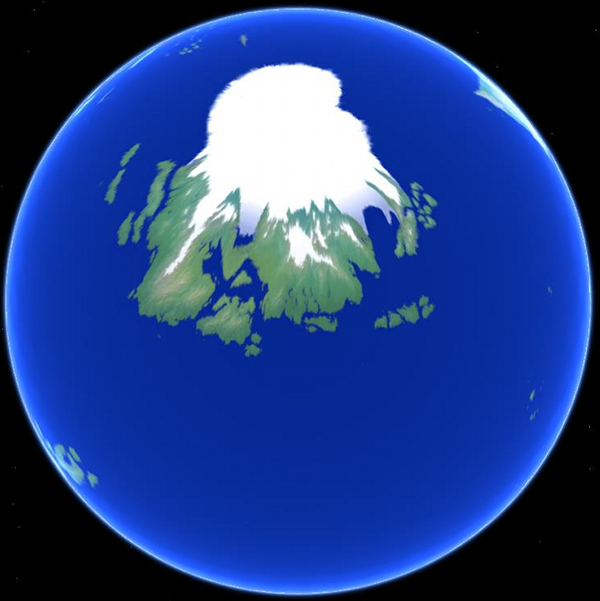 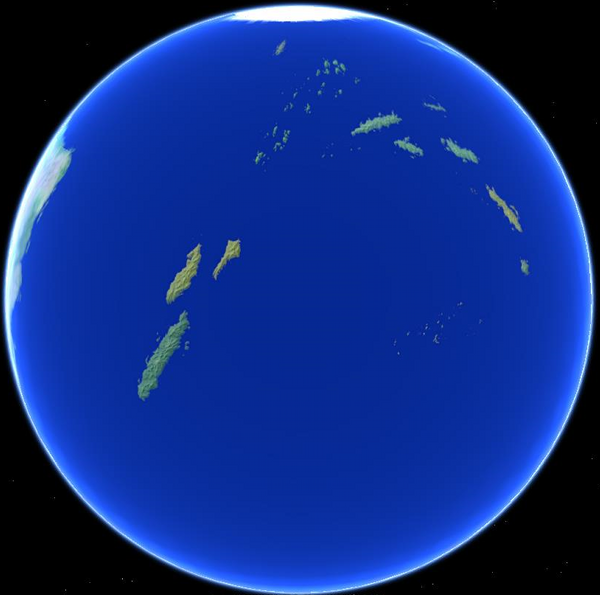 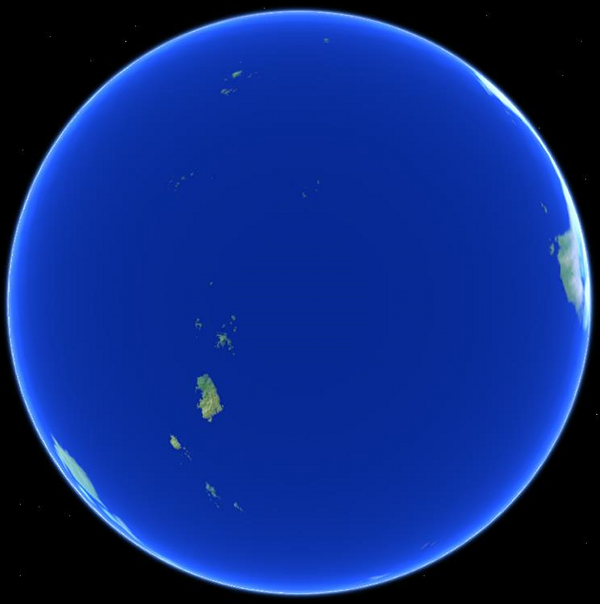 Do you both want to see my constructed world? Really see it? As in being able to spin the world around and check out the continents and stuff?

1. Open your copy of Google Earth (or download and install the program from the Google Earth website, and then open it).

2. Have a look at where you live, or work, or whatever - you know you can't resist it!

3. Okay, now you've got the personal voyeurism stuff out of the way, go to the menu along the top and click on 'File', followed by 'Open ...' (or for the groovy key massagers among you, hold down the 'Ctrl' key with one finger and stab at the 'o' key with another finger).

4. Type (or, even easier, copy'n'paste) the following into the File Name box:

5. Enjoy! When it comes to closing Google Earth, the program will tell you that you've got stuff in your temporary folder and do you want to save it. I'd suggest you click on the 'No' button, if only to save on my feeble bandwidth allowances.

Be aware that GoogleKalieda is nowhere near finished yet; I've got to add all the archipilagos and oceanic islands. And it doesn't go into much graphical detail. And there's no extra information included in it yet - stuff like city names, borders, information bubbles with links to relevant Kalieda Encyclopaedia pages. That sort of thing. But it's a start, yes?
Posted by Rik at 1:00 pm No comments: